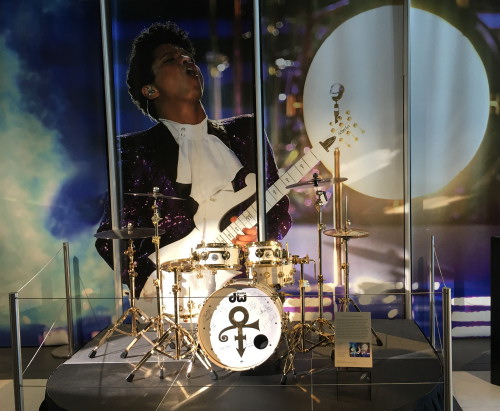 The GRAMMY Museum® has acquired the five-piece DW Drums Collector’s Series® drum kit played during GRAMMY® winner Bruno Mars’ tribute to the late GRAMMY-winning icon Prince on the 59th GRAMMY Awards® on Feb. 12, 2017 at STAPLES Center. The five-piece set was donated to the Museum’s permanent collection by Oxnard, California-based, drum manufacturers, DW Drums, and is now on display in the Museum’s lobby.

Mars and his band, the Hooligans, paid tribute to Prince on the 59th GRAMMYs with a performance of Prince’s 1984 hit “Let’s Go Crazy.” While Mars played a white Schecter Cloud guitar, his brother and drummer, Eric Hernandez, played the gloss white, DW Drums Collector’s Series® kit complete with Prince’s iconic “symbol” hand-painted in gold leaf on the bass drum head which is currently on display at the Museum. The tribute also featured performances of Prince’s “Jungle Love” and “The Bird” by Morris Day and the Time.

“This donation is a huge milestone in the development of the GRAMMY Museum’s permanent collection,” said Bob Santelli, Museum Executive Director. “This piece will help us continue to educate visitors on memorable moments in GRAMMY Awards history, while also placing a much-deserved spotlight on some of the great artists of yesterday and today. We thank DW Drums, and Bruno Mars and his band, for this generous gift.”

“It was an honor to create this very special drumset for Eric Hernandez to play as part of Bruno Mars’ incomparable tribute to Prince at the 59th GRAMMY Awards,” said Drum Workshop, Inc. Executive Vice President and Drum Designer, John Good. “To have this set of DW drums included in the GRAMMY Museum’s permanent collection ensures they will continue to be seen and enjoyed by countless visitors to the Museum for years to come, and it is DW’s hope they will inspire the next Prince, Bruno Mars or Eric Hernandez.”

In conjunction with the display, fans can enter for the chance to win a stunning, five-piece DW Design Series® drumset, and DW 5000 Series hardware complete with a bass drum head hand-signed by Bruno Mars and his entire band prior to their performance at the 59th GRAMMYs. Registrants may enter to win the DW Drum display in the lobby of the GRAMMY Museum or in the online sweepstakes at www.dwdrums.com/GRAMMYMuseumContest. No purchase necessary.

Back to black! In 2006 the first firefly was launc 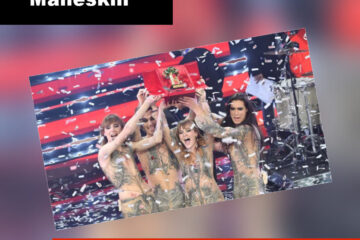 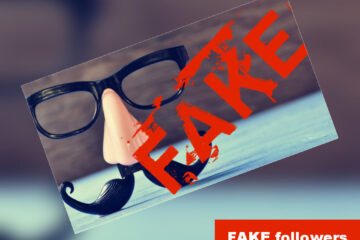