Erik Stams (BMus-hons) has been a professional musician for over 20 years. He is currently performing, recording and teaching in London and South Wales.

Erik began playing drums at the age of ten. After graduating from New York’s Fiorello Laguardia High School of Music and Art and the Performing Arts (FAME) under Justin Dicciocio, he studied drum-kit, percussion and general music at the Brooklyn Conservatory of Music, privately with the legendary Henry Adler (author of Buddy Rich’s Snare Drum Rudiments and Louie Bellson’s Modern Reading Text in 4/4), Walter Garces and briefly with Jerry Gonzalez (the Fort Apache Band). Erik honed his craft performing, recording and touring in and around NYC, specializing in Funk, Reggae, Jazz, Ska and Rock. He can be heard on various albums, film soundtracks (Francis Ford Coppola’s New York Stories, Dust on the Wings – Australia, The Inbetweeners) and television commercials.

Jost Nickel INTERVIEW⁠ ⁠ Jost is one of the ve 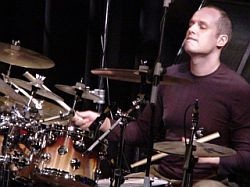