Fabrizio Cavallaro
an Italian drummer who reached the American Dream

Marco Mammoliti – Hi Fabrizio, thanks for spending your time with us and welcome on www.planet-drum.com

Let’s start from the beginning. You started playing when you were 10 years old and then you went on to study with Maxx Furian.
I would like to introduce you to our readers, by talking briefly about how Fabrizio Cavallaro was born as a musician, who were the most influential people and musicians during your journey that allowed you to begin your career as a full time working musician?

Fabrizio Cavallaro – The first person who really got me involved in Music was my Mom, not because she was a musician or because she was particularly into music, she simply forced me to attend a school with the music program since it had the best teachers in my area.

I never showed much of an interest towards music before and actually I really disliked the idea of having to study an instrument…That was until I watched the concert on orientation day, an older student started playing a groove on drums right in front of me and that was it… In that very split of a second everything changed, every part of myself went from no interest in it to knowing that would have been my life calling…never have I felt such a strong emotion again to this day.

While in middle school my teacher was Luca Campioni, he inspired me a lot during those first stages of my development, but I was already pretty obsessed.
When I turned fourteen I went on to study with Maxx Furian, one of the most successful drummers in Italy, and the very first person to really believe in me.
Right from the day of the audition at 14 years old he called my Dad and told him I should consider the option of taking drumming more seriously since I had the talent and potential to become a professional drummer.
I would have never expected that, I was just playing because I loved it, but since that day I completely switched my focus from competitive sports, which is what I was involved in at the time, to music.

M.M. – When you turned 18 you auditioned for Berklee College Of Music and got accepted with a scholarship. That experience allowed you to study with world renowned drummers such as Terri Lyne Carrington, Dave Di Censo, Marko Djordjevic, Mike Mangini, Kim Plainfield, Ian Froman and many more. But I am sure that moving to Los Angeles after graduating from Berklee to start working as a professional musician was probably another extremely important learning experience. Can you compare the two experiences and the different ways they made you grow as a musician?

F.C. – School is safe, even a school like Berklee College Of Music that is attended by some of the best young musicians in the world is still a way safer environment than most working situations.
In school you are allowed to make mistakes, but in real life you aren’t really.
Berklee still served as great training ground for me, because I was lucky enough to get called on drums for many of the bigger live productions and video projects Berklee was doing, some reached millions of views on youtube and gave me great exposure.
To a certain extent that allowed me to experience what working under pressure means while still being in school and partially prepared me to actually working in Los Angeles.

Of course once your money is involved the whole game changes, especially since the money and reputation of the person hiring you is involved in it too.
Therefore any mistakes highly increases the chances of not getting called back again and also damaging your reputation around fellow musicians.
Both good news and bad news travel and expand very fast, you need to try to be as prepared as possible every time so you can use this snowball effect to your advantage.

M.M. – In your career you have experienced working on big stages with the pop star Lilit Hovhannisyan and many other artists, TV appearances on the “Golden Melody” Tv talent show in China in front of millions of viewers, worked in the recording studio and even playing in bars and smaller venues. What kind of qualities do you think are necessary on a personal level to work in such different and challenging environments?

F.C. – Being humble, grateful and reliable…In my opinion these are three of the most important personal qualities you need to have.

I can confidently say that I had NONE of those qualities when I first started working here in Los Angeles and I really had to learn that in the Hardest way: losing the gigs!

I really needed to realize how lucky I was for having the chance to make a living by just playing drums. Most people have to spend full days in front of a computer screen, waiting tables and so on. Let’s not forget that, learning such an important lesson really helped me to put my ego aside and understand that I was getting paid to exclusively make the artists or producers musical visions come alive.

Now I try to make sure to leave all my opinions at the door when I walk into a gig unless I am asked to express them.
There is a place where I still have a chance to express my true self and experiment and that is my own music and projects which I will soon be sharing with you guys.

M.M. – I have had the chance to watch some of the videos from your masterclasses around the world and noticed you have a really unique approach to the Concepts of “Linear Drumming”. Can you talk about how you prepare for a Clinic and what you want to transmit to the people who come see you?

F.C. – My main goal when doing a masterclass is to make sure that people who come to see me leave with concepts instead of preconceived licks and ideas.

In other words when thinking about drumming I like to first see the big picture before venturing into specific stickings or licks. By looking at the big picture you develop systems and concepts that have an infinite amount of possible outcomes which allow you to freely improvise and react to musical situations while you are playing. Thinking in terms of specific licks instead, is the exact opposite, you are limited only to certain patterns you already rehearsed and that will cause you to sound repetitive and also out of context at times.

I would like drummers to be inspired in using my concepts to create their own vocabulary and help them find their own voice which is the longer way but also a more fulfilling and useful one.

M.M. – Can you show the Planet Drum followers some of the more basic exercises to start developing the concept of Linear Phrasing?

F.C. – You can find them in the video version of this interview

M.M. – What are your future projects?

F.C. – One of them is my original music project. It’s a duo with a film music composer. It’s half acustic and half electronic.
A lot of sound design is going into the project and also pretty interesting drum grooves/sonorities, I am using a setup that I have never used before which I actually find very inspiring.
The music is scored live to images and landscapes, the goal is to create a full multidimensional experience during live shows.
Nothing has been released yet, but we are in the process of writing the music and recording it. I am really excited to be sharing it with you all soon.

F.C. – I play Ds Drums, it’s an Italian brand that makes beautiful drums, extremely premium just like some of the other Italian top brands. I can definitely say the best sounding and best looking drums I have ever played.

They have just built a custom set up for me, the finish looks insane, they are shipping it here to LA right now and I can’t wait to record some content with it.

M.M. – Thank you so much for your time and, if you want, we can already announce that a column on Planet Drum edited by Fabrizio Cavallaro will soon start. A really interesting column because it will not only deal with pure drumming technique but it will reveal the background, anecdotes and lifestyles of USA, a country that, more than any other, remains in the dreams of every Italian drummer. 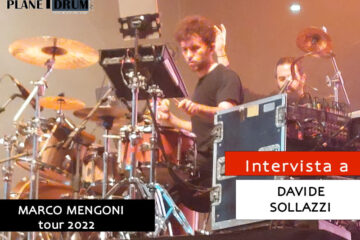 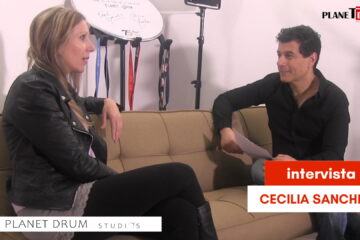 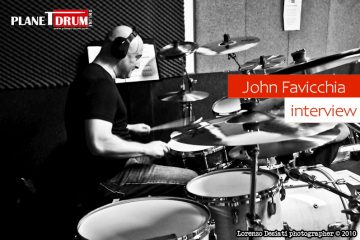 great artists. Favicchia has been busy touring and recording as well as stepping up to the plate with his own solo releases. His band Dharma All Stars blends various styles into a powerful blast of fusion that spans the extremes of the dynamic range. Today Planet Drum and Marco Mammoliti have had the pleasure to meet John and ask a few questions.